You select lineup by choosing 11 players that will form the team for next game. To select player for lineup click on any element of the row of his data. Once player is selected his data will be highlighted with red colour. To remove player from lineup click on his row. You will be able to save the lineup and tactics after the 11 players limit is reached and each of the formation has at least one player (goal, defence, midfield and attack). 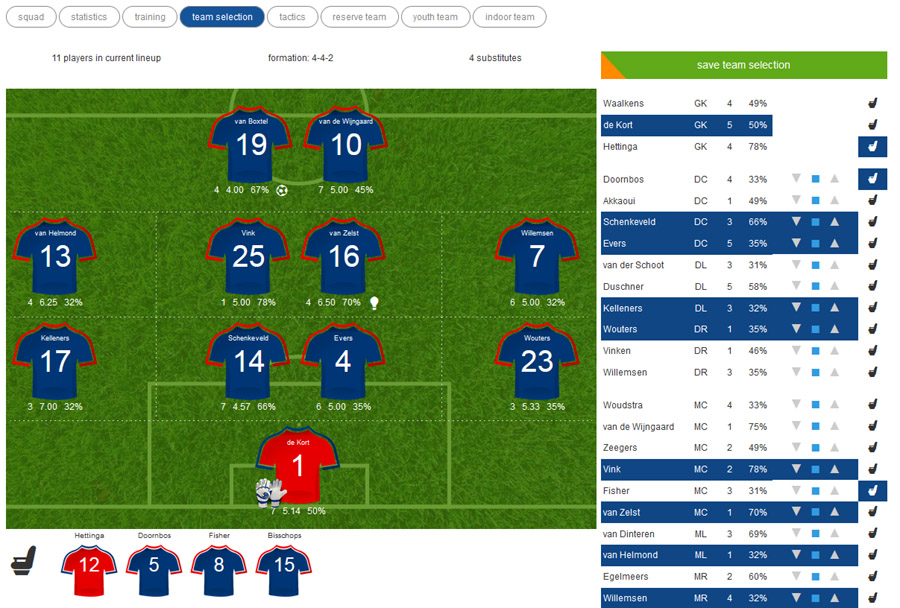 You can choose up to 4 substitute players that might be used during the match, but they are optional. To select player as substitute click on the "sub" button at the end of the line.

Together with lineup you select tactics and team approach for the next game.

By choosing any tactics other than normal you will affect the performance of your team, but f.e. selecting attack on wings does not mean that your players will constantly try wings - they will try other options, but if possible will use wings.

The team approach defines how much effort you want the players to put in the next match:

Also on the tactics screen you choose set pieces taker - list of players with best potential in set pieces is available to choose from current lineup. Small soccer ball icon is indicating the player that is currently the set pieces taker on the list and the formation block. 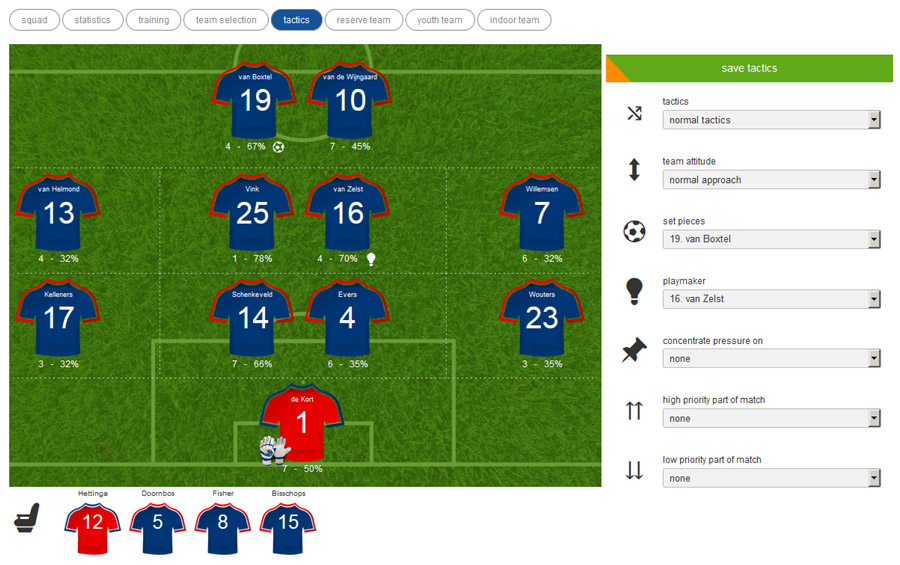 On the club strategy page you can choose team captain for current season. If his charisma level is known it will be given in brackets next to his name as a hint who would be suitable for the position. Charisma is important, but not the only factor to take under consideration.

But here's the twist - once you choose team captain it can't be changed until the next season, nor you can choose anyone else if the team captain is unavailable for any reason (f.e. injury or he was sold to another club). To make things a bit more complicated your team will benefit from captain's charisma during the matches if he is in starting lineup, but if he is absent in this particular match (or you haven't yet chosen a captain) their morale or team fit could suffer.

Also team captain is vital (together with assistant manager) in determining other team members current form.

Of course you're not gonna find here technical details of the match engine, but we can share some of the basics that would give you some insight into the game mechanics.

In every single game of the genre random factor is essential to the match engine and in most cases users complain that "the game is random" or "game is too random". Of course Football-o-Rama match engine does involve random factor, just like the ball or players unpredictible errors are random factors in real football. In our engine player skills are the most important factor, but without random interference the game would be extremely boring - players with best skills would always win.

In months of testing the match engine we have determined that the random factor influence in Football-o-Rama is kept within reasonable range and in long games it often happened that the same team won the championship few times in a row or team winning Division 3 would end up on top Division 2 next season.

During the match random element is used mostly to simulate different situations that take place on the field, f.e. most of the duels include which of the players was lucky enough to be in better position, closer to the ball or the ball bounced right way so it was easier for him to take a shot. But it is one element that still requires from him enough skills to make use of the advantage, so random factor does influence the match flow, but does not define it.