A semifinal to remember 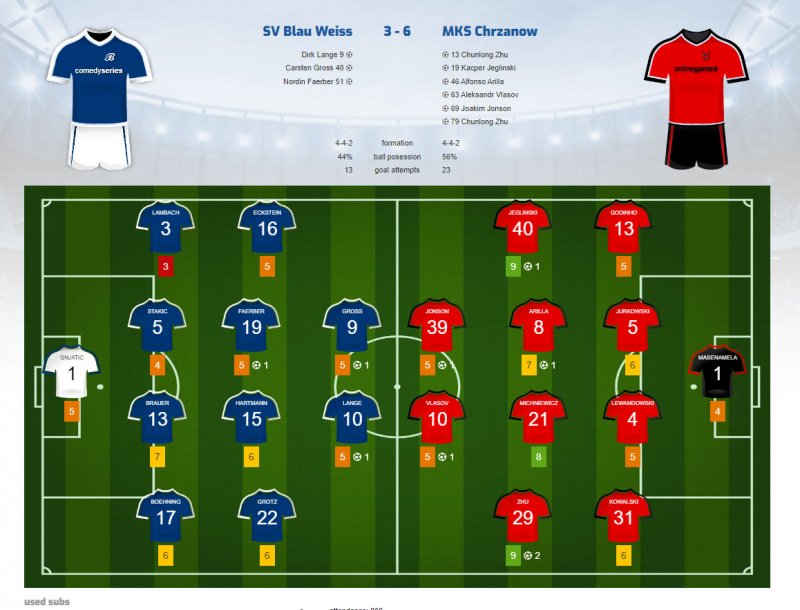 The LLLB Cup semifinal duel between SV Blau Weiss and MKS Chrzanow was something to remember with 16 goals scored in 2 matches.

In first leg SV Blau Weiss manages to win away 4-3 with Nils Granqvist scoring a hattrick. MKS Chrzanow had to prepare something spectacular for the 2nd match and they certainly have. Playing away on the Merck Stadion after 19 minutes they were winning 2-1 already. Up to 50th minute it was a very even duel and the score was 3-3.

This would give SV Blau Weiss the ticket to the final, but in next 30 minutes MKS Chrzanow managed to score 3 goals. So, after 3-4 score home and 6-3 score away team from Chrzanow won on aggregate 9-7, which is something definitely worth to remember.

Congratulations to both teams for this unique semifinal.

In Elite Cup final Bombezni Lamantyny beat Kimmeridge 3-0 and 5-1, which means that after winning the domestic cup last week and being current leader of Division B1, Bombezni Lamantyny could be the first winner of all 3 trophies in a single season. Well, at least they did not win the Indoor Championship last night, so their domination is not yet complete. In HSLS Cup FC Comandoh, not without struggle, won 2-0 yesterday and secured the cup after losing 0-1 in first leg against Cathaysia FC. In LLLB Cup FC Harvester managed to beat MU Krave FC 3-0 last night after 1-1 draw in first leg. Both teams play in Division C1, where MU Krave FC is 3rd, while FC Harvester after tough season is 8th. Congratulation to winner, finalists and those, who did not reach the finals this season.

In Division A FC Comandoh (A1), after beating Junior MKS 4-0 in semifinal, will face Potion Drinkers (A1), which beat Tecate FC 2-1. Both finalists are in top 3 of their division, which might be sign of interesting final. In Division B Bombezni Lamantyny (B1) will face ES Recife (B2) in surprising final. In previous rounds ES Recife played against 2nd and 3rd division teams and in final they will play against the strongest team in the Division B and current leader of B1. In Division C two strongest teams, Kimmeridge and Nothing Toulouse FC, will fight for the cup. In semifinal Nothing Toulouse FC beat 3-0 RAEC Mons, while Kimmeridge won 4-0 against 2nd division BohaiCaiyun FC. In Division D Nanning Royals FC (two-time champions of D1) will face a 2nd division Royal Alkmaar. Nanning Royals FC beat in semifinal current leader of D1, SPTTJS, while Royal Alkmaar beat 1-0 3rd division Real Las Palmas.